When it comes to HVAC service in Stockbridge, putting together an accurate HVAC design is essential. Whether you’re installing a new system into an existing space or putting together a new build, a careful assessment and precise calculations are key. While the sheer square footage being heated or cooled is obviously a major factor, there are many other variables to consider as well. The importance of the HVAC load calculation really can’t be overstated. When it comes to comfort and efficiency, the math has to be right.

Simply put, an HVAC load is the amount of heating or cooling a building needs. When initially designing an HVAC system, there is a design load. This is a basic calculation assuming square footage, heat sources, annual temperature ranges and changes, as well as access, usage, and anticipated real-world conditions. Design loads tend to be fairly accurate and have a built-in amount of leeway. Design loads typically calculate the load at around 15-20% higher than the actual load during the ideal design conditions. This gives a buffer to help meet the occasional extreme loads. 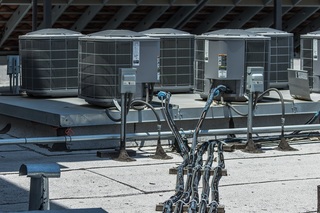 Extreme loads are exactly what they sound like. These are the highest and lowest temperatures experienced in your area. Obviously, this varies from one region to the next. In Florida. you aren’t going to anticipate subzero temperatures. It simply doesn’t happen. At the same, Chicago typically doesn’t experience the heat that Tempe, AZ, does. Stockbridge, GA, isn’t known for polar temperatures, so cold weather isn’t as big of a concern as hotter temperatures. The good news is that extreme loads typically only occur around 1% of the time, so they’re a lesser concern.

At this point, the importance of a proper HVAC load calculation should be pretty apparent. If calculated correctly, you won’t be investing in a system you don’t need. Having an over sized HVAC system is a waste of money. It could also cost more to operate throughout the year, resulting in higher than expected bills. Of course, an HVAC system without proper capacity is a problem too. If your HVAC system is constantly struggling to keep up with a partial load, it’ll never handle an extreme load. You’ll be looking at high monthly bills as well as the need for periodic repairs as parts begin to fail.

This is why HVAC design for commercial property always requires accurate HVAC load calculations. Heat sources, open spaces, square footage, and air flow all have to be considered, as well as the weather and temperature changes and ranges within a given region. An established HVAC company operating in your area should already be familiar with many of these factors.

For HVAC repair in Stockbridge, always rely on the experts. Contact Omega Heating and Air at 404-438-0353 if you have any questions or if you require assistance.